You are playing a computer game in which three robots (Aneed, Ben and Cindy) are trapped in a labyrinth. Initially all three are situated in three different locations in the maze. There are three outlets through which the robots have to exit. As expected, there are several obstacles in the maze and the robots can't go through them.

The maze can be modeled as a square grid with NxN. cells. The robots are placed on three different cells into the maze. You can command them to move. A single command will be activated for the three robots simultaneously. A robot will move to a new position if it is an empty cell within the maze or it is one of the target cells, otherwise the command will be ignored for that robot. Your task is to command them such a way that all of them are on three exit cells (in any order). 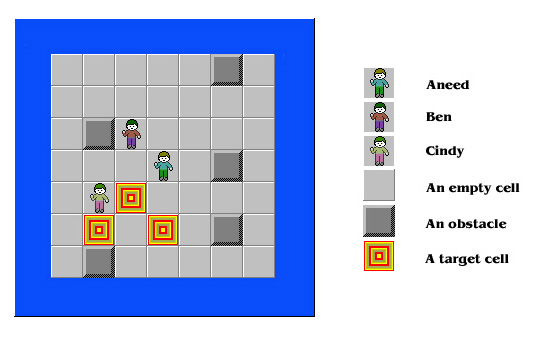 The first line of input is an integer, T (T < 50), that indicates the number of test cases. Each case starts with an integer N (2 < N < 10).  Each of the next N lines contain N characters each that fills up the maze.

For each case, output the case number followed by the minimum time required. If it is impossible to move them as described, print ‘trapped’ instead of the time. Note that the first case corresponds to the above picture.