In the image below you can see a square ABCD, where AB = BC = CD = DA = a. Four arcs are drawn taking the four vertexes A, B, C, D as centers and a as the radius. The arc that is drawn taking A as center, starts at neighboring vertex B and ends at neighboring vertex D. All other arcs are drawn in a similar fashion. Regions of three different shapes are created in this fashion. You will have to determine the total area if these different shaped regions. 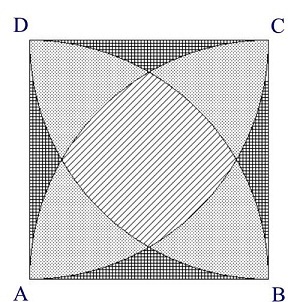 The input file contains a floating-point number a (0 ≤ a ≤ 10000) in each line which indicates the length of one side of the square. Input is terminated by end of file.