In car races, there is always a high pole next to the finish line of the track. Before the race starts, the pole is used to display the starting grid. The number of the first car in the grid is displayed at the top of the pole, the number of the car in second place is shown below that, and so on. 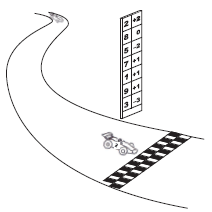 We are in the middle of the Swedish Grand Prix, the last race of the World Championship. The race director, Dr. Shoo Makra, is getting worried: there have been some complaints that the software that controls the pole position system is defective, showing information that does not reflect the true race order.

Can you help Dr. Shoo Makra?

The input contains several test cases. The first line of a test case contains one integer N indicating the number of cars in the race (2 ≤ N ≤ 103). Each of the next N lines contains two integers C and P, separated by one space, representing respectively a car number (1 ≤ C ≤ 104) and the number of positions that car has won or lost relative to the starting grid (-106 ≤ P ≤ 106), according to the pole system. All cars in a race have different numbers.

The end of input is indicated by a line containing only one zero.

For each test case in the input, your program must print a single line, containing the reconstructed starting grid, with car numbers separated by single spaces. If it is not possible to reconstruct a valid starting grid, the line must contain only the value -1.