The halting problem is a classic Computer Science decision problem which consists basically in determining whether a given program will always stop (ie, terminate its execution) for a given arbitrary input or will run forever. Alan Turing proved in 1936 that it is impossible to solve the halting problem generalizing for any pair program-input. In this problem, however, given the description of a simple language, a program written in this language and an entry to this program, you must determine if the given program stops with the given input, and if so, what is the output produced.

The basics operations are: attribution (MOV), sum (ADD), subtraction (SUB), multiplication (MUL), integer division (DIV) and rest of integer division (MOD). All these operation have a syntax COMMAND OPERATOR1,OPERATOR2 (without spaces between the comma and the operators), where COMMAND is one of these operations, OPERATOR1 is one of the ten variables (R0 to R9) and OPERATOR2 could be one of the ten variables or an integer value (between 0 and 999). All operations change the value of OPERATOR1, thus MOV R4,100 is equivalent to assigned 100 to R4, as MUL R3,R8 is equivalent to multiply R3 by R8 and assigned the result to R3. The operation DIV, as well as MOD, returns 0 (zero) if OPERATOR2 is 0 or if the equivalent variable has the value 0. Thus, DIV R4,0 is equivalent as MOV R4,0. For integer division, we understand the integer part of quotient of the division (no fractional part). For example, the integer division of 7 by 2 is 3 (the rest being 1).

There are six decision flow commands: IFEQ (if equal), IFNEQ (if different), IFG (if greater), IFL (if less), IFGE (if greater or equal) e IFLE (if less or equal). The syntax for all them is COMMAND OPERATOR1,OPERATOR2 (without spaces between the comma and the operators), where OPERATOR1 and OPERATOR2 could be variables (R0 to R9) or integer values (between 0 to 999). Thus, the command IFEQ R4,123 is the equivalent to test is R4 is equal 123. If the tested condition is true, the program continues to run the next line of the decision command normally. If the condition is false, the program turns to run the next line of the nearest ENDIF. All of the decision commands must have an ENDIF command correspondent.

The following example illustrates a program that calculates the factorial of a number. 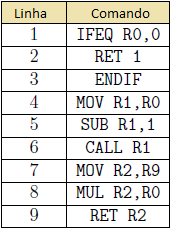 1st line: Check if the value of R0 is equal 0, if so runs the next line else jump to the 4th line (nearest ENDIF).

2nd line: Return 1 as output of the program.

3rd line: Mark the end of the decision block initiated at the first line.

9th line: Return the value of R2 as output of the program.

The following table brings the summary of the commands for reference: 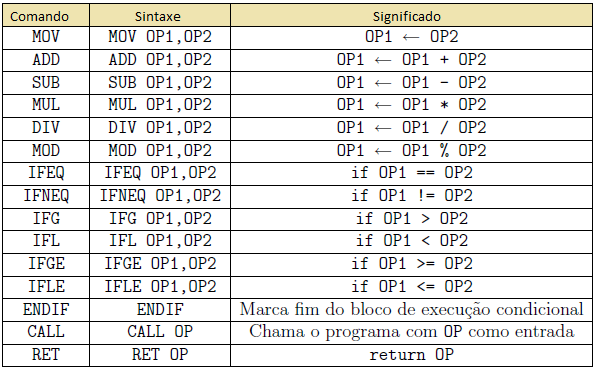 The input contains several test cases. Each test case initiates with two integers, L and N, representing respectively the numbers of lines of the program (1 ≤ L ≤ 100) and the value of the input parameter of the program (0 ≤ N ≤ 100). The following L lines contain the program. You can assume that it is always syntactically correct according to the rules defined above. All of the command (as well as the variables name) will only contain uppercase letters. The end of the input is marked by the case of L = N = 0 and should not be processed.

For each test case your program must print a single line, containing an integer that represents the output value (return) for the given input N, or an asterisk (*) in case of the program never ends.