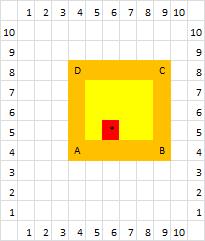 The input consists of several test cases. The first line is formed by a number N indicating the total number of test cases. The next N lines consist of 10 integers (Ax, Ay, Bx, By, Cx, Cy, Dx, Dy, RX, RY) representing each of the vertices A, B, C and D and the location X, Y robot. Each value is separated by a blank space.

The output should print for each test case, the number 1 if the robot is within the area (considering the edges of the figure as part of the area of the figure) , and print the number 0 otherwise.