Few people know that, in the series of events preceding the bloody Red Wedding, Lord Frey promised Robb Stark a part of the Riverlands' territory, and also a mansion. The very words that Lord Frey told Robb Stark, in a meeting at the Twins, were:

— Here is the map of the Riverlands and of all the buildings which exist in them. Put a nail on the location where you wish your mansion be built. Choose any location you want, unless it lies over or at the north of an already existing building. Yet, if the location you choose lies at the same latitude of other building, this other building must be further east than your location.

— Take now these other nails and put them on already existing buildings, and they shall belong to you too. Choose whatever buildings you wish. Know that, after finishing, I shall stretch this rubber band around all the map and I shall let it go, so that the nails stop it. All the territory on the boundary or in the interior of the region defined by the rubber band shall be yours. However, do not abuse my benevolence. If the area of your territory exceeds B square metres, I will cut your head off right here.

Robb did his choice in order to own the largest possible area of land keeping his head, at least for a while. Can you guess the area that he obtained? 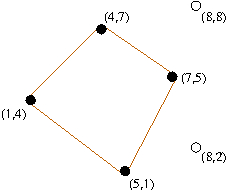 Print a line containing only the exact value of the area of the land that Robb Stark received, without unnecessary leading or trailing zeros.