The Agency for Simulation of Vehicles (ASV), managed by its founder Crishna, is working on a project to retrieve data related to vehicle collisions in crossings of some regions in the country.

The first simulation the ASV will perform consists in randomly place C vehicles in crossings of a well determined region. At the beginning of the simulation there will be a maximum of one vehicle at each crossing. A region is represented by N horizontal lanes that cross with M vertical lanes.

Once the simulation is started, each vehicle will move following its initial direction (Nort, South, East, or West) at a constant velocity of 1 crossing per second.

In the picture below a simulation is shown where N = 5, M = 6, and C = 7, vehicles are represented by arrows indicating their initial directions. Note that the 3 highlighted vehicles will collide in some moment. 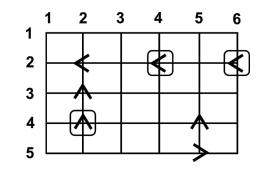 Since the ASV simulation software is not yet completely reliable, they will provide examples of initial configurations to count the number of vehicles that will not collide.

The first line of input contains three integer numbers N, M, and C, (2 ≤ N, M ≤ 105 and 1 ≤ C ≤ min(105, N × M)) representing the amount of horizontal lanes, the amount of vertical lanes, and the amount of vehicles in the simulation, respectively. Each of the following C lines will contain two integers Ai and Bi and one character D (1 ≤ Ai ≤ N and 1 ≤ Bi ≤ M) representing that the i-th vehicle is initially at the crossing between the Ai-th horizontal lane and the Bi-th vertical lane, with a direction indicated by D: ’N’ for the North, ’S’ for the South, ’L’ for the East, and ’O’ for the West.

Your program must output a single line, containing an integer number, representing the number of vehicles that will not collide.